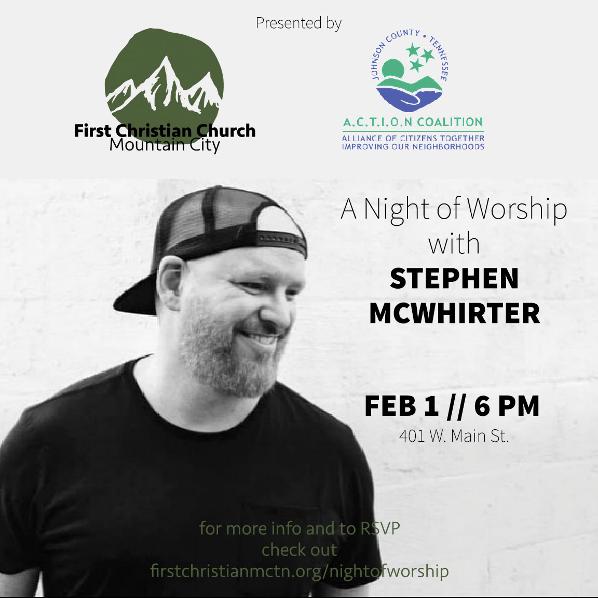 First Christian Church, along with multiple community partners, is proud to announce 'A Night of Worship with Stephen McWhirter'.

The night of worship will take place on February 1 at 6PM.  This event will be FREE to the public.  However, there is limited seating available and we are asking that you please RSVP through the church office so that we can accommodate all who wish to attend.  You can RSVP by calling the church office at (423) 727-9151 or emailing fccmctn@gmail.com

Stephen McWhirter grew up the son of a traveling evangelist, but the man he knew in private and the one he knew in public, were not the same. Due to the hypocrisy he witnessed as a child, he believed Jesus was simply fantasy. As he grew into his early teens he wanted nothing to do with Christianity. At this time of his life, he fell into extreme drug addiction. Eventually, becoming a crystal meth addict, for over 5 years. During this dark chapter, someone gave him a book about Jesus, which he miraculously accepted.

One night, at 3am, he set in a bed reading the book, with drugs next to him on the side table. That night, as he read, he was acutely aware of the presence of God, in the the room. Stephen began to have an internal dialogue with the Lord, he knew He was real but didn’t know how to quiet the life of addiction he had known for so long. In that moment, with a thought more powerful than he could ever have imagined, He felt the Lord say, “You don’t have to do it alone, because I will do it!” and in that moment, Stephen believed Him and gave his life to Christ. He found himself with a willpower not his own, and overnight, went from addiction to redemption. He had come to personally and intimately know the God that saves.

Stephen was a lead vocalist with Iron Bell music and has recently ventured out for a solo career.  Check out the video below of his music with Iron Bell as well as his full testimony.